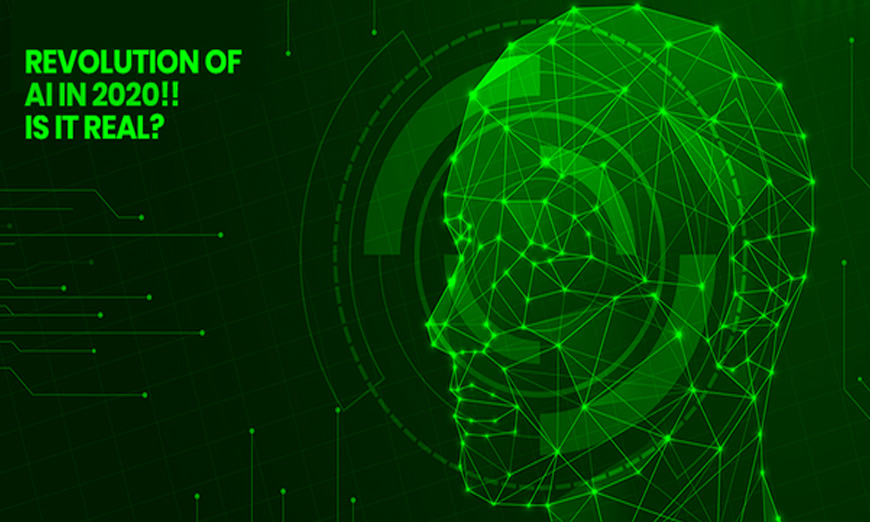 Well, if you like reading technology news, you may have come across various facts and stats about the revolutionizing technology: Artificial Intelligence.

With these stats, facts and quotes, it is quite evident that artificial intelligence will definitely be a big thing in the near future. In fact, the mania of AI is that 41 percent of consumers are expecting that their life will sooner or later be changed with AI. Just like these stats, there have been various predictions about the Artificial intelligence future but have you ever wondered from where the concept of AI started,

what is the present of AI & how it will change the life of people in the future?

With these stats, facts and quotes, it is quite evident that artificial intelligence will definitely be a big thing in the near future. In fact, the mania of AI is that 41 percent of consumers are expecting that their life will sooner or later be changed with AI. Just like these stats, there have been various predictions about the Artificial intelligence future but have you ever wondered from where the concept of AI started,

Let’s find answers to these questions in this blog:

But before analyzing that let’s know the exact meaning of artificial intelligence:Artificial intelligence means to impart the abilities of human brains to the computer-based software. The AI-based web or mobile applications are able to perform the actual functions which were earlier restricted to humans. The logical & cognitive thinking are now seamlessly performed by this latest technology.There is no doubt that artificial intelligence along with machine learning and deep learning has revolutionized the working of software. They have become more supportive, interactive and humanly in their performance and preciseness.

Okay, so from where the concept of artificial intelligence started?

Almost six decades ago, various technology enthusiasts started exploring this marvelous technology. Although its concept was in existence from the past few centuries since the 1950s there has been no hindrance in its evolution.

1. Alan Turing developed a test to determine whether a machine can have human intelligent behavior or not.

2. A computer scientist from America, John McCarthy coined the term Artificial Intelligence in 1955.

3. In 1961, First Robot was introduced at general motors.

7. The development of self-driving cars was started by Google in 2009.

9. World champion Lee Sedol was defeated in Go (an ancient Chinese board game) by Google DeepMind’s AlphaGo in 2016.

10. 2017- the year when skin cancer and heart rhythms were diagnosed by medical breakthroughs with AI.

AI evolution of AI in the past 70 years is really revolutionary. From the 1950s to the present, Artificial intelligence along with its subsets, deep learning and machine learning have reached every industry with the crucial contribution of companies, computer scientists and software developers.

What is the position of artificial intelligence at present?

At present, artificial intelligence is one of the key areas where various software development companies in India & rest of the world are willing to invest. Neglecting this technology– at the present times– can bring repercussions for your business. Have you ever wondered, total how many companies have no or unclear plans to use AI? Only 22 percent! This statistics was found in a review study by MIT Sloan Management and Boston Consulting group.This technology is seen as a strategically important service which has to be added in the offerings of businesses of every field, from tourism to healthcare. There are a number of AI tech that is ruling the software development world. You can incorporate them into your business to reap the benefits of artificial intelligence.

Have a look at some top AI technologies in the year 2019:

Biometrics:Maximum security has been a major concern in human civilizations from the times they have been established. Different ways have been evolved over centuries to provide maximum security and AI is contributing to the same.Do you have any idea how artificial intelligence is helpful to this world for increasing security? You all can connect with the face recognition and fingerprint unlocking option in your mobile phones. This is one of the best examples of the impact of Artificial Intelligence on human lifestyle.As per an international digital security company, Gemalto, Biometrics is the most obvious means of authenticating and identifying individuals in the year 2019.” It is not fixed to the recognition of image & speech. At present, visual biometric devices can recognize iris, finger, retina and face. These AI based devices are used to effectively authenticate the person when an authorized entry is allowed.Machine learning:Machine learning popularity as a means to achieve artificial intelligence is on the rise. This is the subset of AI and allows the machines to learn but it doesn’t require any software programmer to stuff them with the codes!

Various software applications and software products are being developed on the concept of machine learning for example image processing, dynamic web search, self-driving cars, to name a few. Google maps which are being used to navigate a place works on the algorithms of machine learning.Robotic process automation:

All across the world, robotics have given a great boom to the rise of AI. Various software products have been replaced with the interactions of human after the onset of robotic process automation. This basically involves developing robots which can provide process information and sensory feedback.By using of this AI technologies, you can perform various tasks such as solving a query, performing complex calculations, logging in and logging out. All these tasks can be done with reliability and accuracy at a faster rate.Nowadays, researchers believe that these services have the capabilities of reaching out to the areas of finance, human resources, and accounting. Many of these processes in various industries from hospitality to healthcare has been automated with robots.Internet of things:Internet of things or IoT is commonly used in combination with AI. Their applications and benefits are defining the trends of software industry. One of the most popular examples is automated vacuum cleaners which came into existence in 2002.However, it is not broadly recognized as other AI applications. Some other examples of integration of AI with IoT are self-driving vehicles and smart thermostat solutions. Also, it is expected that in future, these technologies will be used in combination for emotional analysis, security devices, and face recognition. This combination can easily be explained in a nutshell as a computer program communicating with the device. You can also assume AI to be the brain of the body (IoT).Neural networks:

The human brain works with neurons that are connected in a complex manner. In the same way, a kind of programming is being developed that makes machines to work on the neural networks. It is known as Artificial Neural Network (ANN) programming and developed under the deep learning technology. Machine learning is the parent technology of deep learning which is succeeded with the AI.Artificial neural networks first came into application in the year 1989. Some representatives from Carnegie Mellon University were the first people to develop an autonomous vehicle by using neural networks.In addition to this, as the science has evolved over the years, right now we are more concerned about how our brain actually works rather than concentrating on stimulating the brain. Actually, it is improving our knowledge about ourselves as well as bringing progress in neuroscience with the developments in AI or artificial intelligence.

There are different speculations about how AI will change the future of mankind. After reading various achievements of AI and its subsets in the past and present, it has become quite evident that the AI impact will be profound in the coming years also.Do you remember the robots you saw in the hollywood movies like Star Wars, Terminator, Star Trek? What if someone tells you that these characters might actually walk among us in the near future. Will you believe that or not?Yes! After 10 to 15 years this might actually be true! The present world is almost run by AI and its subsets. Siri, Alexa, Cortana and different number of virtual assistants created by different companies make our lives easier than never before.

Some other future aspects of artificial intelligence are:

More robots like Sophia will be produced with the help of AI:It is expected that in the near future there will be more Sophia like robots. These robots will be developed by integrating the Artificial intelligence technologies with robotics like visual data processing and face recognition.Competition among Virtual Assistants will also IncreaseAmazon’s Echo and Alexa are dominating the market of virtual assistants, but do you need other options to choose from? The performance of these AI driven gadgets might improve and new functions will be added in the future. Therefore, it is expected that everyone will have their own personal AI virtual assistant in the future.Chatbots will be more Empathetic

Previously , the chatbots were programmed with specific replies but in the future they will be more effective and interactive. Whenever you visit any web application, you will be able to interact with the chatbots that are more user friendly and responsive as well as understanding of your needs and expectations.AI will Improve HealthcareAlready there are many AI driven devices which can help health specialists and doctors to diagnose patients like heart rate and respiration. Still, there is room for many improvements. In the future, patients will get prompt assistance with the help of Artificial intelligence.Face recognition will become your IdentityNowadays, everyone is aware about biometric. In the future, it is expected that in order to enhance the security of various crucial activities, face recognition will become universal. Soon your credit or debit cards and driving license will be linked to the recognizing with your face.AI will revolutionize the Education Industry

The AI applications in education will help teachers and other educators to know how much students can absorb the lesson, what is their performance and their status regarding the learning. You can think this way: If personalized recommendations on web apps can make the buyers more happy with valuable (subjectively, at least) purchases, then customized learning and education through artificial intelligence would enable all the students to find their passion at a much younger age.Machine learning in Digital MarketingThis area could be said to be the best platform where the power of artificial intelligence can serve widely. The applications of artificial intelligence in the digital marketing will help the firm to interact with their clients with relevant messages and at the relevant time.Search engine optimization is one of the crucial aspects of digital marketing. It deals with the understanding of artificial intelligence algorithms with power the google search engine. It is perhaps one of the cases where digital marketers have to adapt themselves at artificial intelligence instead of it being the opposite way. The ideas of AI will force content marketers to optimize their content as per new AI-powered search methods such as voice search.

Artificial intelligence is a powerful force to affect the lifestyle of humans in the future. Since its inception, AI has evolved from simple technologies to various complex devices that can perform the functions of a human mind.If you are a small businessman or entrepreneur, you should definitely include the power of AI in your business. It will not only give you efficiency but also provide you preciseness. For this you should contact Xicom Technologies which provides expert software, web and mobile application development solutions based on AI technologies.I have been working here as a Sr. Software Engineer for the past 8 years. Here my main job is to evaluate the projects and implement Artificial Intelligence technologies in them to make them ready for the present and future market. I use latest cutting edge technologies of AI as discussed in this article to build these projects.